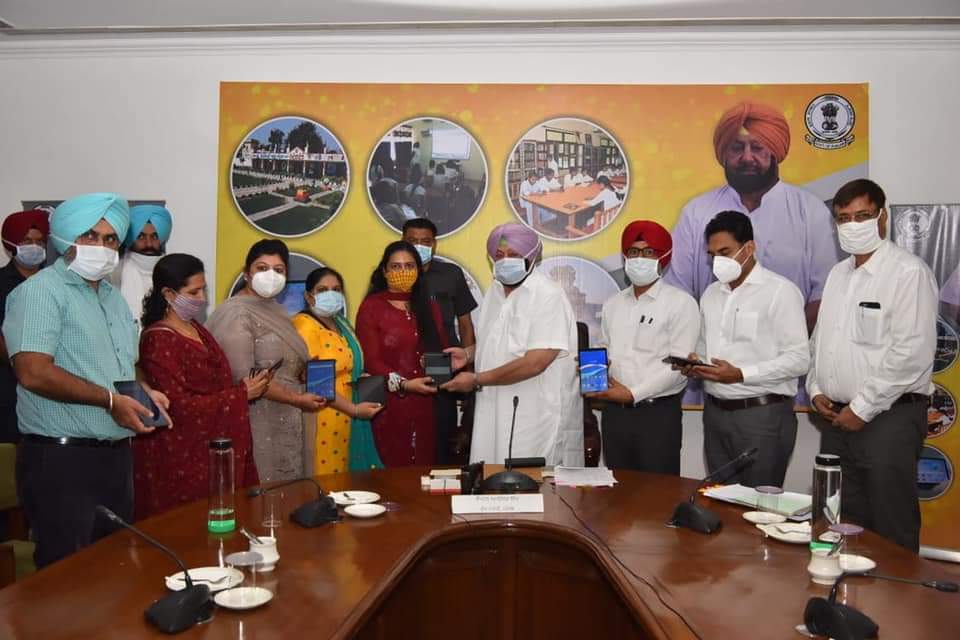 Chandigarh, November 6
Even as he distributed 2625 tablets to students in 372 primary government schools, Punjab Chief Minister Captain Amarinder Singh on Saturday launched Mission Shat Pratishat (Mission 100%) for the year 2020-21 to empower schools to achieve 100% results despite the Covid crisis and also virtually inaugurated another 1467 Smart Schools in the state.

At the virtual event, which connected him to teachers, students and their parents from more than 4000 schools and Ministers, MLAs, officials and non-teaching staff through WebEx, Facebook and YouTube, the Chief Minister also announced the creation of 8393 pre-primary school teachers posts and said the same would be filled up soon by the Education Department. Pointing out that as many as 14,064 contractual teachers had been regularized by his government, he listed out various measures undertaken for the welfare of the teaching staff. Captain Amarinder disclosed that self-defence training was being given to female physical education teachers below the age of 50 to equip them to provide Karate Training to all girls studying in govt. schools.

To mark the conclusion of the Punjabi Week today, the Chief Minister directed Minister Tript Bajwa to draw out a detailed plan for the promotion of the Punjabi language and revival of the Patiala Central Library, which was facing an acute funds shortage. Pointing out that Punjabi became the official language in Patiala in 1940, replacing Farsi, he recalled Patiala’s long-standing relationship with Punjabi. Maharaja Bhupinder Singh had made the first Punjabi typewriter in 1938, he noted.

Captain Amarinder also observed that Punjabi had been named an official language in Canada and UK, where a large number of Punjabis were settled, thus giving global recognition to the language. Punjabi should live and grow in the hearts and minds of every Punjab, he said, while stressing the importance of English and other foreign languages to enable students to compete globally. He disclosed that more than 3.7 lakh students had opted for English medium in government schools.

Pointing to the challenges in education in view of the Covid situation, Captain Amarinder said Mission Shat Pratishat was aimed at further strengthening the digital education infrastructure in schools through E-Books, EDUSAT Lectures, E-Content and Online classes through Zoom App, Radio Channel, Broadcast of lectures through TV, Khan Academy Lectures and Video Lectures prepared by the teachers

The Mission, said the Chief Minister, would help further boost the standards in government schools, which had witnessed massive improvement in the education quality and performance in the past three years, in line with the state government’s decision to curb all malpractices in Board exams. A National Achievement Survey held early in 2017 had shown that the State of Punjab could not perform on expected lines, he recalled, adding that the strictness brought in thereafter had led to exceptional improvement in the students’ performance. In fact, said the Chief Minister, the increasing shift of students from private to government schools was one of his government’s biggest achievements, and noted that government schools had outperformed private schools in Board results for two successive years.

Lauding the contribution of smart schools to raising educational standards in Punjab, the Chief Minister said of the total 19107 schools in the state, 6832 were currently Smart Schools, to which another 1467 were being added today. He said 13859 projectors would be provided to the remaining schools too, in order to make them Smart Schools, adding that a budgetary provision of Rs 100 crore had been made this year for digitisation of schools.

Earlier, Cabinet Minister Vijay Inder Singla said while 8393 posts had been advertised, more would be filled up in due course. Pointing out that the Captain Amarinder government had initiated steps, since the first cabinet meeting in 2017, to improve educational infrastructure in the state. Punjab became the first state in the country to universalize pre-primary school education, as per the Right to Education Policy brought in by the Dr Manmohan Singh government in India in 2010. This helped increased enrolment in government schools, he pointed out, adding that the state government schools had shown record increase in admissions, with 13.48% more admissions registered this year compared with last year.

Online transfer of teachers had been introduced, with merit among the various criteria, in accordance with which 7300 transfers were done last year, the Minister said. Direct recruitment of teachers was also started through PPSC, he said, adding that as many as 14000 temporary teachers had been regularized. All these steps had helped raise the level of education in Punjab’s schools, said Singla. He thanked teachers and other staff in schools for their contribution during Covid times, through online education, providing mid-day meals, distribution of books etc.

Tript Bajwa spoke about the government’s initiatives to promote Punjabi language and said Punjabi literature was being digitized, in addition to other measures taken to encourage the use of the language. He expressed concern over the financial crisis faced by Punjabi University, and added that the Patiala Central Library was also facing a funds crunch.

Education Secretary Kishan Kumar said apart from the exceptional increase in enrolments, the schools had shown good results as a result of improved infrastructure, recruitment of teachers to meet shortfall, etc.

Stressing the importance of ensuring good quality students to secure the future of Punjab’s children, Chief Secretary Vini Mahajan said the government was committed to taking all possible steps to provide the best possible education to them.

During the virtual event, several teachers shared their experiences of the transformation that had taken place in schools and the education system in the past three years. Ludhiana’s Sahnewal School Principal Karamjit Kaur shared that she had joined as a direct recruit in a totally transparent and merit-based process. Dr Jaswant Rai, a Punjabi teacher in a Smart School, said the face-lifts that schools had got had them attractive for students, who had got books from Hoshiarpur district.

Taran Taran school headmistress Jeet Kaur termed her recent regularization (she was recruited initially as a temporary teacher) as a dream come true, while the improvement in infrastructure and standards in government schools were today better than private schools.

The virtual meet saw a video presentation on smart schools, showcasing the exponential change brought in by the present government in the schooling system in Punjab.