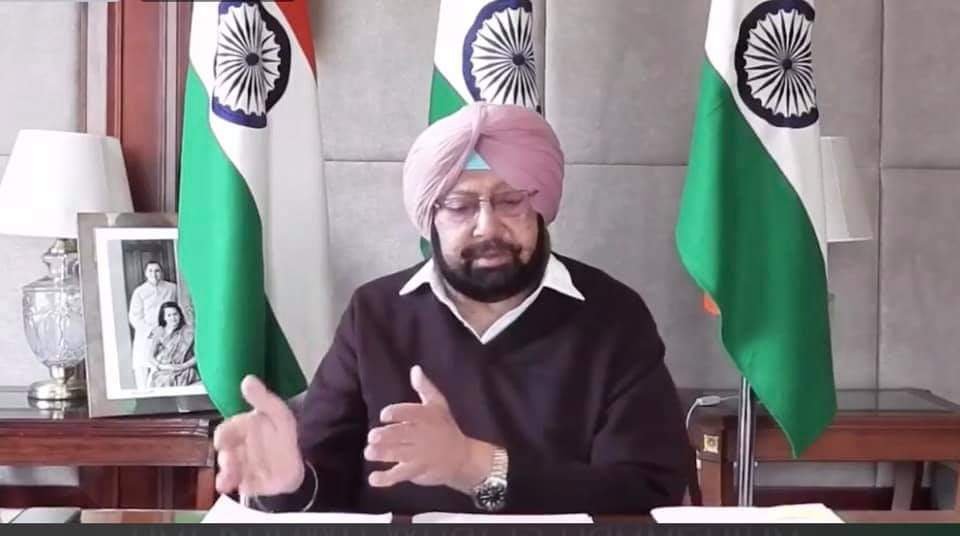 DIRECTS TESTING TO BE RAMPED TO 30000 A DAY, AUTHORISES DCs TO IMPOSE NIGHT CURFEW IN HOT SPOTS IF NEEDED

Chandigarh, February 23
Amid growing concern over the rising Covid trend in the state, Punjab Chief Minister Captain Amarinder Singh on Tuesday ordered restriction on indoor gathering to 100 and outdoor to 200 persons from March 1, along with strict enforcement of mask/social distancing etc, with testing to be ramped to 30000 a day.

Chairing a high-level virtual meeting to review the situation, the Chief Minister also authorised the DCs to impose night curfew in hot spots in their districts if needed, with micro containment strategy to be adopted. He directed the Police force to ensure strict enforcement of wearing of masks, along with notification of Covid monitors by all restaurants, marriage palaces, with the the Department of Excise and Taxation to be the nodal agency for the same.

The Chief Minister said a decision on reducing occupancy in cinema halls will be taken after March 1. Private offices and restaurants shall be encouraged to display last tests done for all employees, he added.

While directing increased testing, Captain Amarinder ordered mandatory testing of 15 contacts per positive, with monitoring to be done by CPTOs and review to be undertaken by the Health Department.

The Chief Minister also took stock of the Vaccination status, underlining the need to carry out an IEC campaign to promote 100% coverage of healthcare and frontline workers. He directed the Health Department to plan for an strategise the roll-out of vaccine for the elderly population and those with comorbidities.

Expressing concern over the 3.23 CFR, Captain Amarinder took note of the mortality audit findings that many of the deaths are happening within 2 -14 days of hospitalisation. He underscored the need for continued supervision of protocols for managing patients with comorbidities, especially in private facilities. Citing cases of some deaths at home, he further directed the Health Department to ensure proper monitoring of home isolation cases, especially those with comorbidities. The Fateh Kits comprising self-monitoring instructions should positively reach all persons in home isolation the same day that they are tested positive, he directed.

The Chief Minister asked the Health and Medical Education departments to ensure that all positions for which special hiring has been allowed are filled at the earliest.

Apprising the Chief Minister of measures taken by the Punjab Police to enforce adherence to safety protocols, DGP Dinkar Gupta said instructions have been issued to field officers to strictly impose restrictions.

Earlier, in a brief presentation, Health Secretary Hussan Lal informed the meeting that the districts of Amritsar, Hoshiarpur, Jalandhar, Ludhiana, Patiala, SAS Nagar and SBS Nagar had shown a spike in positivity in recent days, triggering concerns over a possible fresh wave in the state.

On the vaccination front, he disclosed that there had so far been 61 cases of minor adverse events following immunisation, while 6 severe and 14 serious cases had been reported. All had since recovered, he added.

Dr KK Talwar, who is heading the state government’s expert group on Covid, said a detailed analysis was being done on the recent spike in positivity rate, which suggested an increase in cases among young people. At the current rate, the positivity could go up to 4% in two weeks, translating into 800 cases per day, he said, stressing the need for urgent preventive steps.

Chief Secretary Vinni Mahajan ruled out re-closure of government schools and said the department is taking all steps to ensure the safety of students. Education Secretary Krishan Kumar said teachers have been designated nodal officers in schools to instruct students on the proper use of masks etc and ensure adherence to Covid appropriate behaviour. These steps have come as significant number of cases had been reported from the recently reopened schools, especially in Ludhiana, with positivity rate of 3.1% and Bathinda (2.9%).

So far, no new mutated variant of the Coronavirus had been witnessed in Punjab but new samples had been sent for testing and the results were expected next week, said Dr Talwar.

Dr Raj Bahadur also briefed the meeting on the prevailing situation and the steps being taken to check the spread of Covid.