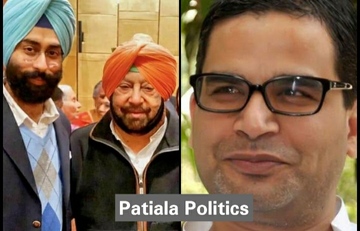 Chandigarh/New Delhi, June 7 (IANS) Even as Punjab Chief Minister Captain Amarinder Singh described election strategist and former Janata Dal-United leader Prashant Kishor as “a family member”, the latter once again rejected the Congress leader”s request to take up the party”s cause for 2022 assembly polls in the state, sources said.

Highly-placed sources in Congress in knowledge of the development told IANS that Captain Amarinder Singh”s grandson Nirvan visited Kishor in Delhi on Saturday.

“However, he was made to wait for two hours before getting a chance to meet Kishor,” a source revealed.

The source further said that in the meeting, Kishor, who heads the Indian Political Action Committee (I-PAC), once again “denied” the request of Captain Amarinder Singh.

This comes just days after the Chief Minister, at a press conference on Friday, described Kishor as a family member.

“Kishor is like part of my family. We are together for a long time,” he said.

During the press conference, Amarinder Singh also said that he had asked Kishor when he met him in Delhi before nationwide lockdown following the Covid-19 pandemic and he was “interested”

He also admitted that 55 out of 80 Congress MLAs want Kishor to handle the campaigning.

However, this is not first time that he has approached Kishor for the purpose.

In January, his Principal Secretary Suresh Kumar had met Kishor in the national capital. And in the last fortnight, Congress state General Secretary Sandeep Sandhu had called up all the party MLAs to write in favour of Kishor.

Meanwhile, Kishor, who had led the Congress campaigning in 2017 assembly polls, had recently rejected the offer of the grand old party, saying he doesn”t want to work in “bits and pieces”.

Kishor had also rejected the Congress” offer to work for it for the Madhya Pradesh assembly bypolls.

The troubles for Amarinder Singh do not end here, as cricketer-turned-politician and his former Minister Navjot Singh Sidhu is being wooed by the Aam Aadmi Party (AAP).

In the 2017 Assembly polls, the Congress swept to power in Punjab by defeating the Shiromani Akali Dal-BJP alliance. In the 117-member state Assembly, Congress had won 77 seats, followed by debutant AAP with 20, while the Akali Dal was reduced to 15, the BJP won 3 and the Lok Insaaf Party two.

Sidhu, who joined the Congress ahead of the 2017 Assembly polls, has been at loggerheads with the Punjab Chief Minister for some time now. He had resigned from the Punjab Cabinet in July last year.

Sidhu”s wife has on number of occasions also embarrassed Congress as she has questioned the party”s leadership in the state.

Even after IANS first broke the news that Kishor was holding talks with Sidhu and mediating for him to join AAP, the former cricketer has maintained silence on the news, and in a video on his Youtube channel has said that ”Pran jaye par vachan na jaye”. The video shows Sidhu”s journey as BJP leader and then his arrival into Congress.

But Kejriwal, in an interview to an English news channel, welcomed Sidhu”s entry into the AAP, giving more air to the speculation that the party was willing to poach him ahead of the 2022 assembly polls.

Kishor, who handled the election campaigning for AAP in the national capital earlier this year is said to be inclined to take their assignment in Punjab assembly polls.

(Anand Singh can be contacted at [email protected])