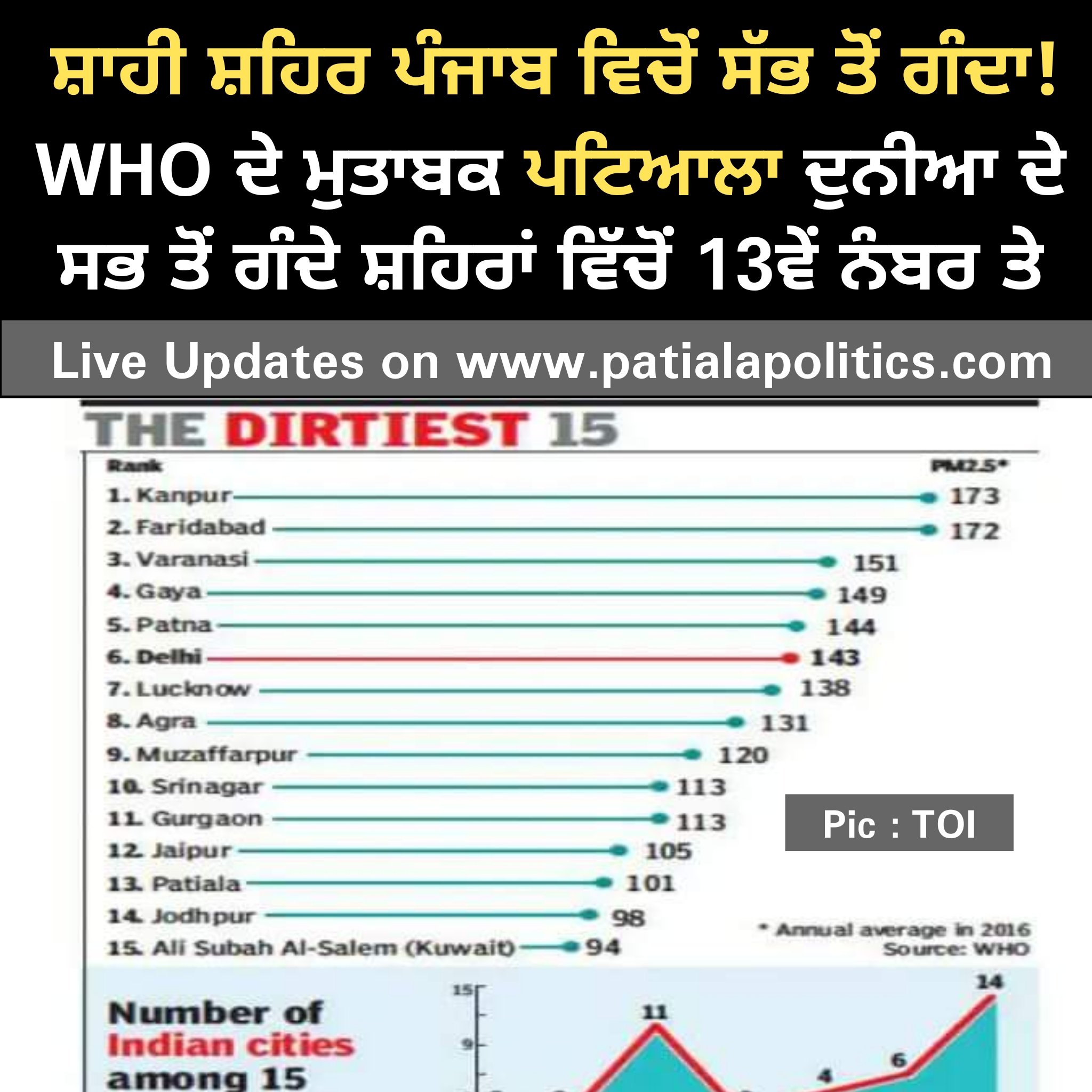 New Delhi, May 2 (PTI)Delhi and Varanasi are among the 14 Indian cities that figured in a list of 20 most polluted cities in the world in terms of PM2.5 levels in 2016, data released by the WHO showed today.The WHO data also said that nine out of 10people in the world breathe air containing high levels of pollutants.Other Indian cities that registered very highlevels of PM2.5 pollutants were Kanpur, Faridabad, Gaya, Patna, Agra, Muzaffarpur,Srinagar, Gurgaon, Jaipur, Patiala and Jodhpur followed by Ali Subah Al-Salem in Kuwait and a few cities in China and Mongolia.In terms of PM10 levels, 13 cities in India figured among the 20 most-polluted cities of the world in 2016.The World Health Organisation has called upon member-countries in its Southeast Asia Region to aggressively address the double burden of household and ambient (outdoor) air pollution, saying the region, which comprises India, accounts for 34 pc or 2.4 million of the seven million premature deaths caused by household and ambient air pollution together globally every year.Of the 3.8 million deaths caused by household air pollution globally, the region accounts for 1.5 million or 40 per cent deaths, and of the 4.2 million global deathsdue to ambient air pollution, 1.3 million or 30 per cent are reported from the region, it said.The PM2.5 includes pollutants like sulfate, nitrate and black carbon, which pose the greatest risk to human health.WHO’s global urban air pollution database measured the levels of fine particulate matter (PM10 and PM2.5) from more than 4,300 cities in 108 countries, according to which ambient air pollution alone caused some 4.2 million deaths in 2016, while household air pollution from cooking with polluting fuels and technologies caused anestimated 3.8 million deaths in the same period.Since 2016, over 1,000 additional cities have been added to WHO’s database, which shows more countries are measuring and taking action to reduce air pollution than ever before.”WHO estimates that around 7 million people die every year from exposure to fineparticles in polluted air that penetrate deepinto the lungs and cardiovascular system, causing diseases including stroke, heart disease, lung cancer, chronic obstructive pulmonary diseases and respiratory infections, including pneumonia,” the report said.According to the report, more than 90 per cent of air pollution-related deaths occur inlow- and middle-income countries (including India), mainly in Asia and Africa, followed by low- and middle-income countries of the Eastern Mediterranean region, Europe and the Americas.”Around 3 billion people more than 40 per cent of the world’s population still do not have access to clean cooking fuels and technologies in their homes, the main source of household air pollution,” it said.It said the WHO recognises air pollution is a critical risk factor for noncommunicable diseases (NCDs), causing an estimated 24 per cent of all adult deaths from heart disease, 25 per cent from stroke, 43 per cent from chronic obstructive pulmonary disease and 29 per cent from lung cancer.The report, however, stated countries are making efforts and taking measures and inthis context, referred to India’s Pradhan Mantri Ujjwala Yojana, which it said, in just two years, has provided 37 million women living below the poverty line with free LPG connections to support them to switch to clean household energy use.India targets to reach 80 million households by 2020.All countries in the region are making efforts to expand availability of clean fuels and technologies, however, over 60 per cent population do not have clean fuel. Thecombined effects of household air pollution and ambient air pollution becomeincreasingly hard to address if not tackled early, Poonam Khetrapal Singh, regional director, WHO Southeast Asia, said.”Air pollution needs to be brought under control with urgent and effective action. Non-communicable diseases are the leading cause of deaths globally and in the region, and air pollution contributes significantly to NCDs such as cardiovascular disease, respiratory diseaseand lung cancer.”Cleaning up the air we breathe will help prevent NCDs, particularly among women and vulnerable groups such as children, those already ill and the elderly,” Singh said.”Many of the world’s megacities exceed WHO’s guideline levels for air quality by more than 5 times, representing a major risk to people’s health,” Maria Neira, director of the Department of Public Health, Social and Environmental Determinants of Health at WHO, said, adding, there is an acceleration of political interest to deal with this global public health challenge.”Air pollution threatens us all, but the poorest and most marginalised people bear the brunt of the burden. It is unacceptable that over 3 billion people most of them women and children are still breathing deadly smoke every day from using polluting stoves and fuels in their homes,” said Tedros Adhanom Ghebreyesus, director-general of WHO.Major sources of air pollution from particulate matter include inefficient use ofenergy by households, industry, agriculture and transport sectors, and coal-fired powerplants. In some regions, sand and desert dust, waste burning and deforestation are additional sources of air pollution.”Air pollution does not recognise borders. Improving air quality demands sustained and coordinated government action at all levels,” the WHO said.