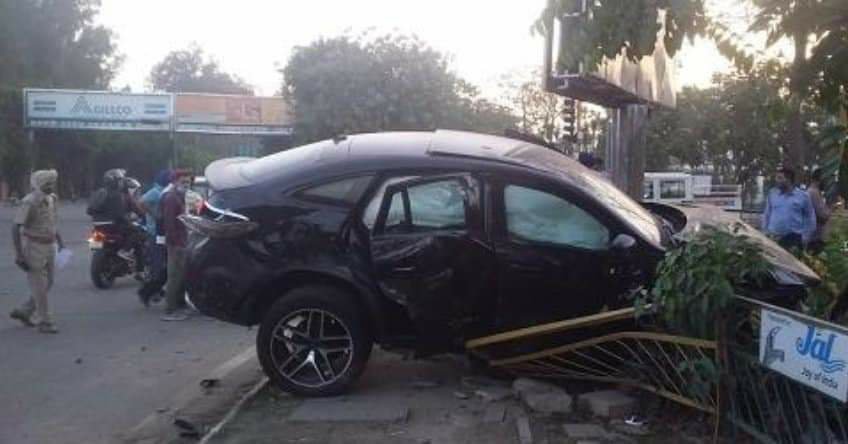 18-years-old Mercedes driver and main accused arrested for mowing down three persons and critically injuring 3 more in MohaliSAS NAGAR/CHANDIGARH, March 21:The Punjab Police have arrested a teenager boy last night for mowing down three persons with his over-speeding Mercedes car near Radha Soami Chowk here in SAS Nagar in the early morning of Saturday.The accused, Samrat, 18 years, a resident of sector 34D, Chandigarh belongs from the family of Weldon Opticals in Chandigarh. He doesn’t have a Driving License and was drunk while driving at the time of the accident. The police have also booked two of Samrat’s friends, identified as Arjun and Prabhnoor, who were accompanying him in the car.The incident took place when Samrat, who was driving the Mercedes bearing registration number CH01CA1869 jumped the traffic lights and rammed his car into an Ertiga car and two cycles, leaving three persons including a cyclist dead and other 3 critically injured. The deceased persons have been identified as Dharampreet Singh, Ankush Narula and Ram Prasad.Senior Superintendent of Police (SSP) SAS Nagar Satinder Singh said that the trio who were riding the Mercedes were drunk when the accident took place and the driver lost control of the car. They fled from the accident spot even after sensing the serious condition of victims and didn’t inform police or ambulance. The police have also recovered empty bottles of liquor from the Mercedes.The SSP said that the police have arrested Samrat, the accused driver who does not possess a Driving Licence. The police are conducting raids and will arrest the other accused persons soon too, he added.Meanwhile, a criminal case has been registered under sections 304 (Culpable Homicide not amounting to Murder) and 120B (Criminal Conspiracy) of the Indian Penal Code (IPC) at Police Station Mataur against the accused. Investigations will be completed in the next two weeks and the Court will be asked to conduct a speedy trial to give an exemplary punishment to the culprits.