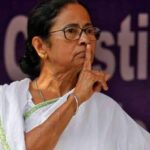 Mamata Banerjee is stacking up a huge victory in Bengal with the Trinamool Congress leading in 219 of 294 seats and the BJP looks set to finish below the 100-mark, the DMK is heading for a big victory in Tamil Nadu, the BJP is retaining Assam and the LDF is keeping Kerala, reveal latest figures in the counting of votes in state.