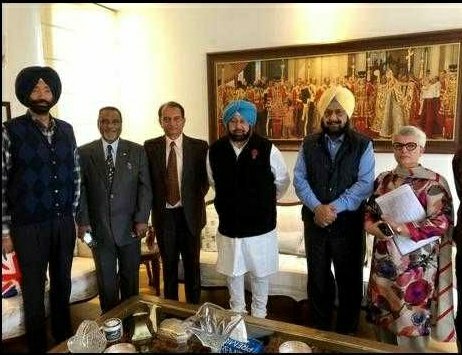 Punjab Chief MinisterCaptain AmarinderSingh on Thursday reviewed the progress of the work for setting up a Sports University inPatiala.A spokesperson said that the CM held a meeting here with the Steering Committee set up to coordinate the work on the university’s establishment.The CM had set up the Steering Committee under the chairmanship of Randhir Singh, an Olympian and senior sports administrator, in October to prepare the draft legislation of the proposed university. The decision to set up the Sports Universitywas announced in June in the Vidhan Sabha.Briefing the Chief Minister, Randhir Singh said the Committee had proposed that the transit campus be set up in the vacant office accommodation of the Mohindra Kothi premises, which earlier housed the Rajiv Gandhi National Law University. The Committee had identified some vacant landnear the National Law University on the outskirts of Patiala city for developing the permanent campus.The Steering Committee informed the ChiefMinister that it proposed to associate with top international universities with strong capabilities in sports, such as the Loughborough University, UK, and Victoria University, Australia, for preparing the institutional design of the Sports University and to decide on the course curriculum.Randhir Singh said the committee has requested the Chief Minister  to write to Lord Sebastian Coe, Chancellor of the Loughborough University and President of the IAAF, to solicit their assistance in this regard.The CM asked the Committee members to prepare a comprehensive Concept Paper after studying the models of various sports universities in the country and abroad, which would form the basis of the draft legislation. He also stated that it will be the endeavour of Government to start the first round of intake of students from the academic session commencing July 2018.Among others present in the meeting were Committee members Dr. JS Naruka, Dr. LS Ranawat, Amrit Gill Director Sports, and Shivdular Singh Dhillon Director Tourism and Cultural Affairs, Punjab.