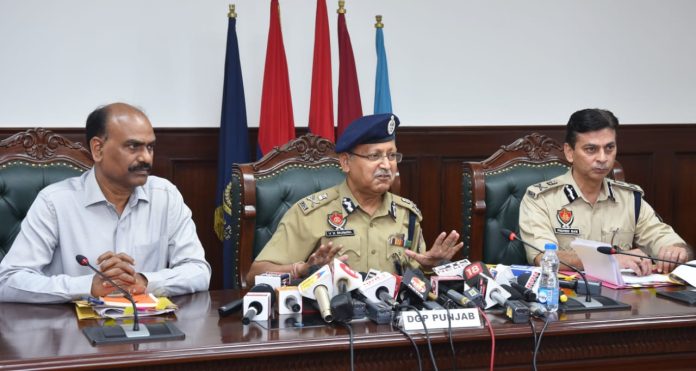 With newly constituted Anti-Gangster Task Force (AGTF) has swung into action, Director General of Police (DGP) Punjab VK Bhawra on Monday gave a clarion call to the people of state to join hands with the Police force against the anti-social elements trying to disrupt the peace and harmony and create a sense of insecurity in the state of Punjab.

AGTF headed by ADGP Promod Ban has been constituted on the directives of Punjab Chief Minister Bhagwant Mann to intensify action against gangsters using intelligence based inputs and coordinating with field units of Punjab Police. AGTF will work directly under the supervision of DGP Punjab.

“This is not a happy situation. Punjab Police has been making strenuous efforts to eliminate the gangster culture in the state and will continue to make efforts in this direction,” said the DGP, while soliciting the support and cooperation of the public to further bring down the crime graph

Divulging more details, DGP VK Bhawra said that taking action against organised gangs and criminals since January 1, 2022, various units of the Punjab Police have busted 16 gangster modules and arrested 98 individuals involved in these activities. A large cache of weapons have been recovered from them which includes four rifles and 68 pistols/revolvers besides impounding 30 vehicles used by these criminals, he added.

He said that six gangster crime related murders witnessed in the state in 2022, all of which have been traced after a thorough investigation on professional lines and a total of 24 accused involved in these cases have been arrested along with a recovery of seven pistols, 18 cartridges and seven vehicles. All these were blind murders in which culprits were not known, he said adding that efforts are on to arrest the remaining accused.