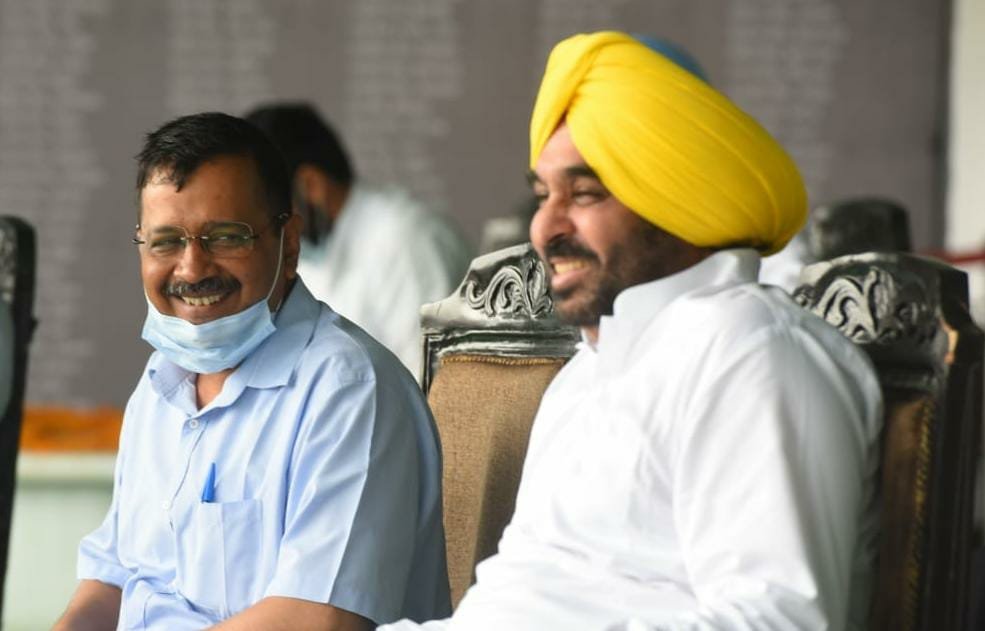 AAP will not sit idly by till black laws are repealed, will stand firm with the farmers: Arvind Kejriwal

We will give jobs on Captain’s ‘Ghar-Ghar Rozgar’ card, when AAP will come to power: Arvind Kejriwal

…..After formation of AAP government in Punjab, we will provide free electricity like in Delhi: Kejriwal

Unprecedented gathering of the people from all over Punjab was witnessed at the Aam Aadmi Party’s (AAP) Kisan Maha Sammelan held in support of the farmers’ movement at Bagha Purana on Sunday. The convention commenced with the leaders observing 2-minute silence as tribute for the farmers’ who sacrificed their lives during the ongoing agitation. Floral tributes were presented to 282 farmer martyrs of the farmers’ movement. AAP’s national convener and Delhi Chief Minister Arvind Kejriwal, who specially attended the Kisan Maha Sammelan, was welcomed by party’s Punjab affairs in-charge Jarnail Singh. Addressing the people, Delhi Chief Minister and AAP’s national convener Arvind Kejriwal said that he had come to salute the farmers of Punjab who were the first to speak out against the three black farms laws passed by the Union government. He said that the movement first arose in Punjab, then it reached Delhi and gradually this farmers’ movement had now become a movement of the whole country. Kejriwal said that whenever there was any injustice, the people of Punjab had always taken the lead in protesting against that injustice.

“Even today, when the Modi government at the Centre came up with the black farm laws in a dictatorial manner, the Punjabis have led the agitation against these laws. The people were rejecting the BJP today only because of the anti-people policies,” he said. Kejriwal said that recently at the BJP stronghold in Surat, the Aam Aadmi Party contested for the first time, winning 27 seats and defeating the Congress. “Wherever I have gone all over the country, people have said that they are all with the farmers’ movement,” he added. Kejriwal said that the people who were calling the farmers’ movement as a movement of one or two states were thinking wrong, in fact this movement has become a movement of every person, every child in the country. “I have not only supported this movement from the beginning, but also participated in it. It is because of the farmers’ agitation that the Modi government at the Centre is being harassed today,” he added. Kejriwal said that the Modi government had now brought a law in Parliament to usurp all the powers of the Delhi government; in which all powers should be taken away from the Chief Minister and given to lieutenant governor (LG). He said that the Modi government wants to suppress the Delhi government, which we will not allow to happen.